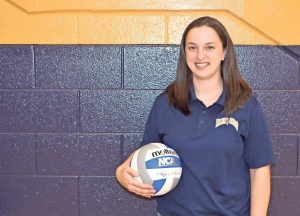 Coach Julie Winfield enters her 5th season with River Ridge HS Volleyball.  She has been a Cherokee County resident for the last 16 years.  Coach Winfield graduated from Etowah HS in 2007.  She played on the varsity volleyball team all four years; earning Player of the Year in the Lakeside Ledger, and led her team to either the Elite Eight and Final Four each year.  Coach Winfield played basketball all fours years as well; and in those four years won a State Championship, and set a record for most three’s in a season.  After high school she received a volleyball scholarship to Reinhardt College and played for one year before leaving volleyball due to injury.  She graduated from Kennesaw State University in December 2011 with a degree in Health and Physical Education and received her Masters in 2016 with a degree in Health and Wellness.  Coach Winfield has 10 year’s of experience coaching volleyball at the high school.   She is married to her husband Jamal, and they have two children.   Coach Winfield is excited to be a part of the Knight Family and looking forward to the 2019 season!

No Events This Week

Events are added by athletic staff.
View All Events