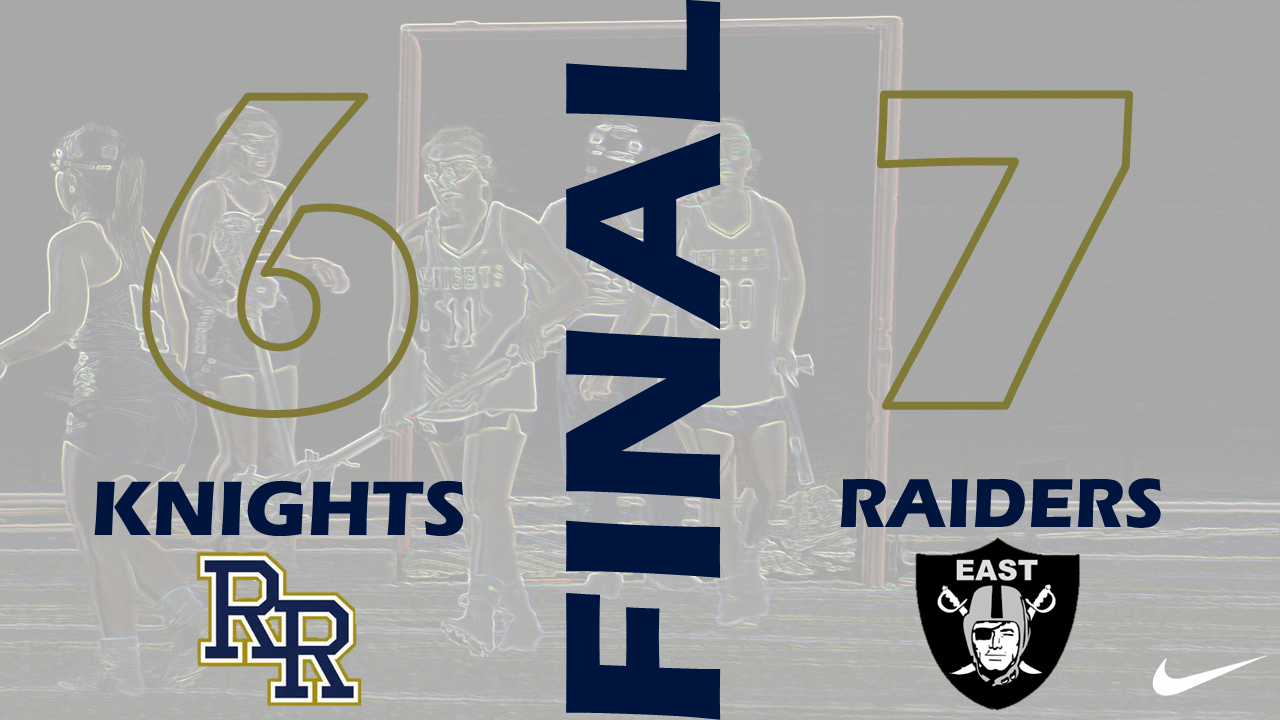 WOW!!! No words can truly describe the effort that our young ladies put forth this past Tuesday night against a very talented squad from East Paulding. The Lady Raiders came into the contest with a 13-1 record and being tied for first place in Area 5. However, if they came in thinking things were going to be easy, they were sadly mistaken. The Lady Knight were more than inhospitable guests as they made sure things would not come easy for one of the top programs in the state.

The Lady Raiders did set the tone early though as they won the opening draw and took the ball straight down the field to take a 1-0 lead after only 36 seconds of play. However, from that point on, the Lady Knights put up one of their fiercest efforts in program history. The defense, led by Juniors Grace Hamrick, Haley Warholak, Mackenzie Aceto, Jordan Pruitt, and Nora Mansell along with Sophomore Riley Parker and Senior Hannah Vecsey stymied the Raiders offense attack all night. Freshman Emma Porterfield has a banner evening in goal as well. Time and time again, the Lady Knights denied the Raiders attempts to penetrate the arc and get to goal. Tenacious double teams and swarming defenders were the theme of the night. The teams traded blows for the next seven minutes and thirty seconds until Junior Jordan Pruitt put a free position shot into the back to the net to knot the score a 1 apiece with 17:42 to go in the half.

East Paulding’s Katelynn Sweeney broke the deadlock with about 15:29 left to put the Raiders back on top 2-1. Both teams were extremely impressive on the defensive end and made it difficult for the attackers to get clean looks at the goal. Each defensive unit thwarted the opposing attackers over the next ten minutes as each team went scoreless. With 5:45 to go in the first half, Sophomore Leah Milligan found her way inside the arc to get a shot on goal to stretch the Lady Raiders lead to 3-1. However, the Lady Knights answered as Jordan Pruitt received a nice assist from Junior Rylee Holland and put the ball in the back of the net with 1:48 to cut the lead to 3-2 with 1:48 remaining until intermission. The Lady Raiders took that 3-2 lead into the half.

Although goals were hard to come by, the Lady Knights Attack led by Senior Hannah Vecsey, Juniors Maggie Gallion, Rylee Holland, Jordan Pruitt, Nora Mansell, Sophomore Riley Parker, and Freshman Emery Polk continued to put forth a valiant effort in the second half. After about three and a half minutes of play, Riley Parker was able to dodge two defenders and sneak a nice shot by the goalie to bring the score even at 3-3 with 21:30 remaining. A few minutes later, Parker would again slip between two defenders to create a one-on-one with the goalie in which she would win by placing a nice shot into the bottom left hand corner of the net. With that goal, the Lady Knights took their first lead of the evening at 4-3 with a little over 18 minutes left in the contest. Not too long after Jordan Pruitt recorded her third goal of the evening receiving a masterful feed (assist) from Hannah Vecsey. That goal, with roughly 16:00 remaining, would stretch the Lady Knights lead to two at 5-3. The Lady Raiders would quickly answer with a goal of their own and close the lead to one at 5-4 with a little of 15:00 left in the game. Rylee Holland dished out another assist Maggie Gallion and she answered with a solid goal to stretch the lead to 6-4 in favor of the Lady Knights. The two teams traded blows going back and forth over the next 12:00 minutes without either team having any luck. With about 3:32 remaining, Katelynn Sweeney would score the first of three unanswered goals with the game winner hitting the back of the net with twenty-one seconds left. Final score ended at 7-6 in favor of the Lady Raiders.

The coaches for the Lady Knights could not be any more proud of them for the fight that they displayed over the night. Their effort was truly inspiring and they are to be commended. Impressive impressive performance put forth by the Lady Knights. Words can’t really describe it but the put forth one of the gutsiest performances in program history. Hats off to an incredible group of young ladies. GO KNIGHTS #ROAR