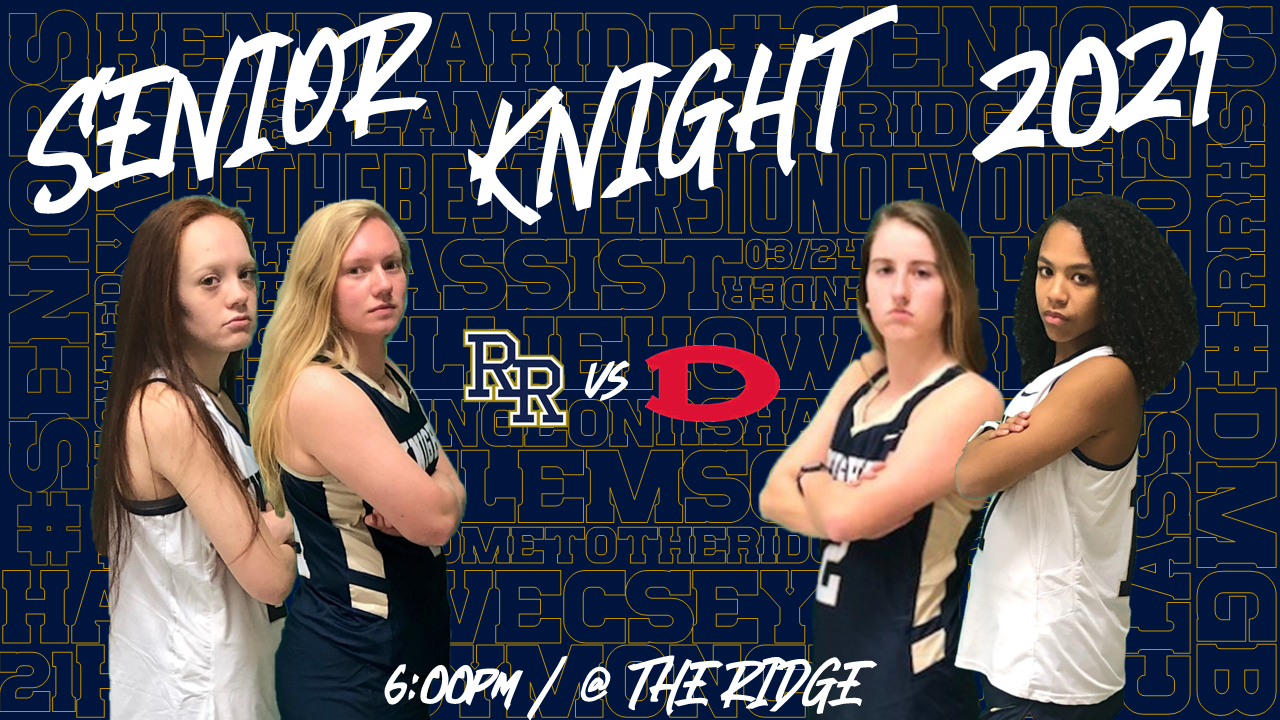 The Lady Knights picked up a big Area win over the Dalton Catamounts at The Ridge on Senior Night. The Knights jumped out to a quick 3-0 lead on two goals from Senior Hannah Vecsey and one goal from Junior Maggie Gallion. The Catamounts answered with a goal from Taylor Thompson to cut into the Knights lead. Freshman Megan Paloski added the next goal for the Knights bringing the score to 4-1 with 13:39 to go in the half. Vecsey added another goal to stretch the lead to four before the Catamounts could answer with a two goals of their own bringing the score to 5-3 in favor of the Lady Knights. The Lady Knights dug in defensively and would not allow another goal from the Catamounts in the half. Juniors Grace Hamrick, Jordan Pruitt, Mackenzie Aceto, Haley Warholak, Nora Mansell along with Senior Kassidy Moncivaiz, Sophomore Riley Parker, and Freshman Emery Polk shutdown all passing and scoring lanes on the defensive end. Freshman Emma Porterfield had some excellent saves as well. With the defense standing strong, the Lady Knights went on the attack scoring three more goals to bring the score to 8-3 in favor of the Knights at the half. Vecsey added her two more goals bringing her total to five on the evening with Pruitt putting one of her own into the back of the net.

At the half, the Senior Lady Knights were recognized for their hard work and commitment to the program over the past four years. It was an excellent ceremony and a wonderful way to recognize the contributions made by them to the program. The Lady Knight Seniors include #2 Hannah Vecsey, #14 Ellie Howard, #17 Kendra Kidd, and #21 Kassidy Moncivaiz. Vecsey will continue her career at Lee University where she has been accepted into the Nursing program. Howard’s plans include attending Clemson University in the fall where she plans to major in Criminal Justice. Kendra Kidd will be attending Kennesaw State University and will major in Elementary Education. Finally, Kassidy Moncivaiz plans on attending a four-year college in the fall to pursue a career as a Special Education teacher.

The Lady Knights controlled the pace of the second half versus that Catamounts as Sophomore Riley Parker put two goals into the back of the net. Juniors Rylee Holland, Nora Mansell, and Grace Hamrick added a goal of their own to bring the final score to 13-6 in favor of our Knights. With the win, the Knights move to 4-4 on the season with a big Area contest slated for Friday Night against the Etowah Eagles at The Ridge. The ball drops at 5:30pm so come on out and support your Lady Knights. GO KNIGHTS!